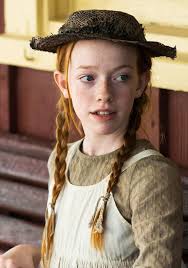 When I was ten, Anne of Green Gables by L. M. Montgomery (published in 1908) introduced me to the depths of despair, the idea of kindred spirits and most importantly, that a good imagination could be your greatest strength.

Miss 11 and I have just finished watching season 2 of Anne with an e on Netflix. Season three will be out next year.

This show is NOT for Anne of Green Gable purists. The Netflix version includes threads about progressive education for girls, sexual preferences for adults and children, puberty and racial discrimination. Who knew Avonlea could contain so much? Some of the new themes just do not work but some of them have brought this classic story to a modern audience.

This article is scathing about the perils of re-doing a well-loved classic. I do agree with the idea that Anne’s imagination flourished against the quiet backdrop of her ordinary life – bringing so much into her daily life diminishes the need for ‘scope for the imagination’.

The characters of Anne, Marilla and Matthew are well-cast – Anne looks just like she is described by L. M. Montgomery. Marilla is her usual sharp-tongued, brusque yet kindly self and Matthew is his introverted, gentle self – albeit with a dead brother and tragic love affair in the Netflix version.

Most main characters follow a narrative arc – we see how they have changed over the course of the book, usually because they have risen to face conflict. In Anne of Green Gables, Anne stays true to herself and doesn’t change but she changes the characters around her – Marilla softens, Mrs Lynde becomes less judgemental, Matthew takes more risks, Diana becomes more creative – all because of their love of Anne. These changes, although slight, highlight Anne’s influence.

I have tried unsuccessfully to encourage Miss 11 to read Anne of Green Gables but my bookworm of a daughter could not get past the long-winded descriptive first chapter. So we broke our family rule of reading the book before seeing the movie.

Many years ago, my husband and I were watching television on a Saturday night and flicking the channels between the footy ad breaks. We saw that the 1985 version of Anne of Green Gables was on, and watched a little. He saw five minutes and exclaimed, ‘This explains everything. I should have watched this movie before I married you!’