Young adult fiction is strong in Australia right now, with adults as well as teenagers reading it. It’s a loose term and applies to the age group of 12-20 year-olds, rather than any genre. Within young adult fiction, there’s romance, crime, mystery, historical fiction and so on. It’s always a good idea to find out the age of the main character – that will give you a clue as to the appropriate age group if you’re choosing books for younger readers. Kids are aspirational readers and like to read about characters who are a year or two older than themselves. So a fourteen-year-old might be interested in a sixteen-year-old character but a book with an eighteen-year-old character might not be suitable for a thirteen-year-old. These are such loose guidelines – every book is unique! Here’s a list of my favourite young adult books which I read this year. I am out with lanterns by Emily Gale – This book is told from seven different perspectives, which means that readers understand someone like Ben, who appears rather nasty to Wren, because we see his point of view and know what’s going on in his life. Most of the characters are about to start year 10. It’s the story of – Adie, who’s moved back to a home she lived in as a kid – Wren, a talented artist who likes both girls and boys – Milo, an autistic teenager who thinks he loves Wren – Sophie, Milo’s younger sister who gets caught up in a horrible online situation –  Juliet, who can remember everything that ever happened to her and anyone she knows – Hari, who also loves Wren and Ben, whose bullying tactics hide his far-from-perfect home life. I loved all the characters and felt it was so fresh, so contemporary. I hope Mr 14 will end up reading it. 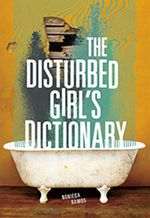 The disturbed girls’ dictionary by Nonieqa Ramos – this book definitely deserves a blog post on its own, because yes, it is a disturbing read. I don’t think we – or our teenager readers – should shy away from reading something disturbing. This book transported me away to fifteen-year-old Macy’s life, where she lives with her mother in a small, one-bedroom apartment. She used to live there with her dad and younger brother but her dad’s now in prison and her brother was taken away by child protection services. Macy wants her mum to get a job instead of entertaining numerous men so that her brother can come back. But at least they’re not living in a car any more. Macy’s best friend, Alma, is becoming more distant and is trying to move away from her life of looking after her numerous younger siblings. Written in the form of dictionary definitions, Macy’s voice is strong, offensive, unapologetic and full of swearing. The front cover of the book has a picture of an old, rusty bath – to represent Macy’s bed when her mother’s ‘guests’ sleep over. A compelling and different read for fourteen-year-olds and up. Catching Teller crow by Ambelin Kwaymullina and Ezekiel Kwaymullina – this is an exciting book, published this year about ‘the enduring strength of Aboriginal women and girls’ (quote taken from the writers’ notes at the back of the book). Beth Teller, fifteen, is dead, but she’s not reunited with her Aboriginal mother who died a long time ago. Instead, she and her white Australian dad can still communicate. Her dad’s a detective and Beth is trying to help him solve a case so she can ease him away from his sadness over her death. The story is told from Beth’s point of view as well as Isobel Catching’s – she has a connection to the case that Beth and her dad are trying to understand. The writers explain that ‘we are Aboriginal storytellers, but we are two voices amongst the many Aboriginal peoples and nations of Australia and we speak for ourselves alone; there is not a single Aboriginal story, nor a definitive Aboriginal experience.’ I’m going to pass this on to Miss 12 to read – it’s a great book for 12-15 year-olds.

His dark materials by Phillip Pullman – The first book of the trilogy, Northern Lights, introduces us to Lyra, a young orphan girl who lives with the Scholars in an alternative Oxford. Lyra is given a special instrument called an alethiometer which uses layers of symbols to tell the truth. The Master of Oxford tells Lyra to learn how to read it for herself once she has been taken to live and work with Mrs Coulter, a fascinatingly beautiful woman. But Mrs Coulter proves to be as confusing and sinister as she is beautiful, and Lyra escapes when she realises she might end up as one of the kidnapped children who have been taken from Oxford. Lyra’s quest to understand the alethiometer and to find her friends Roger and Billy who have been kidnapped by the Oblation Board brings her into contact with the gyptians, who support her. Younger teen readers will enjoy it, and it’s also suitable for 11 and 12 year-olds but it’s a thick trilogy and quite intense. I loved it! There is action, a quest theme, high stakes, the continual problem of who to trust and an amazing fantasy world with witches, talking bears, angels, humans and their daemons. You can read a longer review here. Begin, end, begin – a #Love Ya anthology edited by Danielle Binks – some of my favourite authors have contributed to this anthology – Ellie Marney, Melissa Keill, Jaclyn Moriarty and seven other Australian young adult authors. An anthology could be a great way to tempt reluctant teens into reading again – just one short story, that’s all you have to read! It’s also a good way to find new authors through their short stories. There’s a mix of stories told from the point of view of girls and boys. My only complaint is that the cover is more directed to girls with its floral theme. There’s a new edition coming out next month  – perhaps that one will have a more appealing cover for boys? This book is young adult fiction at its best – smart, sassy, perceptive. The road to winter by Mark Smith – this book is the story of Finn, whose community has been wiped out by a deadly flu which killed his parents. He’s managed to survive for two winters alone on the coast, keeping out of sight from the Wilders. Everything changes when he sees Rose on the beach – she needs help. I found this book gripping and I’m looking forward to reading the sequel. This would be a great book for 13-16 year-old readers.

Other wonderful YA authors include Ellie Marney (her Circus Hearts is out now and is on my list of books to read), Melissa Keill (I loved The incredible adventures of Cinnamon Girl), Jaclyn Moriarty (also the author of the middle grade book, The inconvenient adventures of Bronte Mettlestone) and Cath Crowley (I loved her Graffiti moon and Words in deep blue).

And the winner from last week’s giveaway is – JANE! Congratulations, Jane – I’ll be in touch to deliver your book! Thanks to everyone who left a comment.