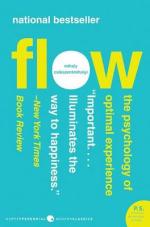 Usually, one doesn’t connect the new Australian Ninja Warriors tv series to Mihaly Csikszentmihali’s book, Flow, the psychology of optimal experience. But during the week I was reading this book, Mr 8 was excited that the Ninja tv show started. He wants to grow up to be a ninja. Let me explain the connection.

The tv show is a chance for contestants to try their luck on an obstacle course. The contestants are physical trainers, gym owners, army majors, ex-Olympians, gymnasts. That gives you an idea of the calibre of the course and the contestants. So far, there have been three nights of heats.

The third night was the hardest and the second hurdle seemed insurmountable. Contestants had to hold onto a zip slide, let it go, and propel themselves forward to jump on to a mat. All the early contestants crashed into the water below. Mr 13, from his viewpoint on the couch, pointed out that the contestants needed to let go of the zip slide before it jolted to a stop, otherwise they would lose momentum and go back slightly. If they took the seemingly bigger risk and let go a fraction earlier, they would keep their forward momentum and swing gracefully onto the mat.

But who wants to let go of the safety slider any earlier than you need to, right?

But this is, according to Csikszentmihalyi, being in the flow, using the movement you already have and not fighting the environment.

I’ve just finished reading Flow, and it took me a while. It always take me longer to read non-fiction, but I was slower with this book, inching forward a few pages at a time. It’s about using your consciousness to stay in the flow and using your skills to attain a goal that is achievable but not easy.

Flow occurs when people become so involved with what they are doing that the activity becomes spontaneous, almost automatic; they stop being aware of themselves as separate from the actions they are performing.

Flow happens when we are caught up in an activity which is challenging but still within our skill set. It can be physical, mental or emotional. I sometimes feel in the flow when I’m writing, sewing, cooking or reading. It feels amazing – the writing pours out from my heart, or my hands are confident as they stitch material or create a feast, or time passes by so quickly because I’m caught up in an imaginary world within a book. I wish I could bottle that feeling!

Csikszentmihalyi noted that adults often say they want more leisure time but they’re not any happier while watching tv from the couch. It’s too passive an activity to experience flow.

Studies show that children need to feel some flow time, too – away from screens or overly structured activities.

About half of the contestants on Australian Ninja Warrior who made it all the way through the course were in flow. They barely paused, their bodies and their minds were in union, and they knew instinctively how to use the equipment. They were a joy to watch. We decided that Mr 8 might need fifteen to twenty years of training, focusing on upper body strength, speed and flexibility to make it as a ninja warrior. And we’re all behind him! In the present, however, he’s in flow, building lego and creating his own ninja course in the backyard.

Tell me your story – when have you felt in flow?