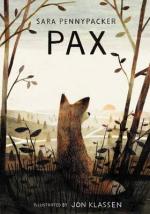 The inside of this book, Pax written by Sara Pennypacker, is as beautiful as the outside. As you can see from the cover, Jon Klassen has created a lovely, almost nostalgic-looking cover, showing Pax, the fox, looking outwards. The cover accurately reflects the book, as half of the story is told from Pax’s point of view. Pax was published this year and is suitable for 9-12 year olds.

Pax is about two individual journeys, both internal and external – one by Pax himself, the other by his boy, Peter. The book is written in third person, alternating stories between Peter and Pax. In the first chapter, Peter and Pax are in a car, driven by Peter’s father. They are going to leave Pax, a tame fox, out in the wild as Peter must stay with his grandfather while his father goes to war. The book follows Peter and Pax’s adventures as they try to find each other, despite all odds.

If you’re thinking that this book sounds sentimental, it’s not. It has too much depth and a bitter-sweet ending to be another sentimental animal story. This book is about friendship, growing up, overcoming fear and becoming who you really are.

And then he told Vola what he’d never told anyone else – about the merging he felt sometimes with Pax, how sometimes he didn’t just know what his fox was thinking but actually felt it himself. He held his breath, hearing how crazy it sounded.

Pax, the other protagonist, is curious, willing, intelligent and focused.

He lifted his muzzle and bayed a single aching note. It had been so long since he’d seen his boy. Before this, they’d never been apart for more than a day.

The bond between them is constant and intimate. Kids who love animals will appreciate the connection between Pax and his boy.

This would make a fabulous book for a classroom discussion, with themes of betrayal and trust, and a background of war and death. I know Miss 9 will enjoy it, and I will definitely suggest to Mr 12 that he read it. And as I enjoyed Pax so much, I am going to borrow Sara Pennypacker’s other books from the library.