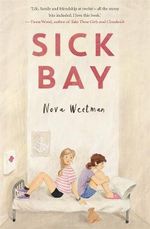 I have rushed into many a school sick bay for my children. There was the time Mr 10 was concussed during a PE lesson. And the time there was a call to pick up Mr 15, then 5. It ended up with a doctor appointment, then a five-day hospital stay – while I was eight and a half months pregnant with baby number 3. Fun times!

Thankfully, most of the time, a calm but purposeful walk into the sick bay, a big hug, a quick sign-out and a rest on the couch was all that was necessary.

Nova Weetman’s book, Sick Bay, tells the story of two grade 6 girls, who don’t have much to do with each other at school but end up getting to know each other in the sick bay. Riley has diabetes, Meg relies on breathing in brown paper bags to keep her calm.

The story is told from both girls’ perspectives in alternating chapters. Meg’s mother is not coping very well after Meg’s dad’s unexpected death. Riley’s mum is protective (controlling?) about her daughter’s diabetes.

Chapter by chapter, the girls edge towards friendship with a few hiccups along the way.

For anyone who feels a little different and has tried to hide it, this is a perfect book for 10-12 year-old girls. It’s an age for friendship dramas, and the end of grade six is such an important stage. Sick Bay thoughtfully presents a range of characters whom readers will adore.