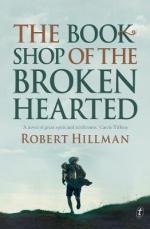 The bookshop of the broken hearted by Robert Hillman – I devoured this book over two days.

It’s 1969. Tom Hope is a Victorian farmer in his early thirties – quiet and stoic. He’s the sort of man who has to practise smiling because he doesn’t do it very often. Hannah Babel is a Jewish woman in her mid-forties from Budapest who lost her husband and small son at Auschwitz in World War II. She’s vivid and eccentric and she wants to open a bookshop in the small town of Hometown.

Tom’s wife, Trudy, left him – twice. But she only came back once. Hannah is a widow two times over. Can they make their relationship work?

The first quarter of this book is all about Tom, and while it may seem a little slow to some readers, the pace really conveys the daily turns of Tom’s life with chores on the farm and the quiet after his wife leaves him. At least he has Peter, Trudy’s son with her lover – for a little while.

Then once Hannah has moved into town, the book intersperses chapters from Hannah’s past experiences in the war with her current life with Tom.

Hannah is determined to make her bookshop a success.

‘Her target was twenty-five thousand, the number of books burnt in Berlin on May 10th, 1933. At the moment she was selling around 110 books each week with the help of the CWA.’

The premise seems simple – can a farmer with a failed marriage and a holocaust survivor from Budapest be happy together? But Tom faces the unthinkable choice – to look after Peter or lose Hannah, who cannot allow herself to become close to another child lest she lose him, too?

This book by Robert Hillman would be fabulous for bookclubs (see bookclub notes from the publisher Text here), for World War II aficionados and for anyone who loves a book set around books. You could even win six copies of The bookshop of the broken hearted and six bottles of wine from Text here! It’s a recent one, only published in the last month. Hillman is speaking at Readings bookshop in Carlton on Monday May 7th at 6.30. There is no fee but you need to book! I hope to see you there!