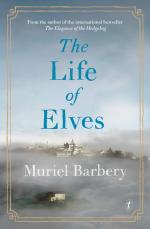 I have never written a book review before I’ve finished reading the book. But I found myself thinking so much about this book, The life of elves by Muriel Barbery, that I wanted to write about it, even though I have about a third of the book still to read. And I really want to talk about it with someone who has read it  – so if that’s you, please let me know in the comments!

This book – is not for everyone. It’s probably a sign of a good book when it’s so divisive. Some reviewers thought it was too airy fairy, over-written, confusing and vague. Others loved it.

I’m in that category. The language is beautiful and evocative. The characters are described with so much detail, so much empathy and such originality. Read this description about Rose –

Certain women possess a grace given them by virtue of an increase on the female essence – as the result of an echo effect which, by making them simultaneously singular and plural, allows them to be manifest both in themselves and in the long lineage of their kin; if Rose was a woman of sky and rivers, it was because the river of those who had come before her flowed inside her, through the magic complicity with her gender that went beyond mere blood relation; and if she dreamed of travel, it was because her vision cut through space and time and connected the border territories of the female continent – whence came that transparency rendering her light and elusive, and that fluid energy whose source was somewhere far beyond herself.

I mean, really! That paragraph above is one sentence.

I forgot while reading this that Muriel Barbury wrote this book in French, so I am reading the English translation by Alison Anderson. When you consider how beautiful the translation is, imagine both how talented the translator is and how stunning the original must be.

Muriel Barbury is a reclusive French novelist, whose second novel, The elegance of the hedgehog, was a best-selling book in Paris and New York.

This story of elves and girls in one sense is a classic tale of good versus evil, with good being in the form of two small orphan girls who have never met. They are both surrounded by adults who care for them, even though they are not related to the girls. Maria lives on a farm in France, Clara has come from the mountains in Italy to Rome. Both the girls have special abilities, which they must rely on to fight opposing forces.

I was struck by the descriptions of the land in France, and how it shaped the people. Here’s a fabulous description of a farmer’s sons – descriptive words about people – irascible, joyful, affable linked to the land – rocks, granite, cliffs.

These two fine young lads looked after the farm under the regency of their irascible old man, and they were joyful and solid as rocks; it was a wonder to see such affable characters being watched over by a commander whose granite self sporadically crashed and shattered at the foot of these cliffs of joyfulness, his own sons.

While I was reading, I felt that I couldn’t wait to read it again – yes, a strange thing to think while still reading a book for the first time! But I’m looking forward to reading it a second time because I felt I had lots of gaps in my understanding of the story, yet because I trusted the writer that she would tell a magnificent tale, I was prepared both to suspend disbelief and to skim over the gaps, trusting that all would be revealed.

That trust between a writer and reader is vital, I believe. As a reader, you want to trust that your time is a worthy investment in this particular writer’s book. So many books, so little time – I want this book to intrigue me, offer me escapism, show me how language can inspire and evoke feelings, hold up a mirror to my own life, show me a character to lead the way… There are as many reasons for reading as there are readers.

Well, this book offered me a tale of good against evil, an evocative setting which was closely connected to the characters, a dream-like, myth-like story, all told with language so beautiful I would stop after reading a paragraph, stare into space and consider it before moving on. And all this with still a third to go! Plus the sequel – still to be published.

This is probably the vaguest book review I’ve ever written. I would recommend picking it up in a bookstore and flicking through a few pages. If that appeals to you, you will love it. If you’re not intrigued by a few pages, then it’s probably not for you. Too many books, too little time – choose another book.

I’m curious to know whether this sounds like a book you might enjoy or whether it’s too ‘elvish’ for you.