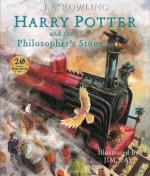 Mr 8 – who used to be Mr 7 until last week! – received the illustrated version of the first Harry Potter book for his birthday. It wasn’t as exciting as his Ninjago lego set but he did feel a little puffed, finally deemed old enough to read Harry Potter.

We read it in a week. I read the first third to him, with him reading a few pages to me each night. Then he became engrossed in the story, and a chapter a night just didn’t cut it. There was also the motivation of watching the movie – which he hasn’t seen – once he had read the book.

He had hundreds of questions.

It’s been years since I read Harry Potter and the philosopher’s stone, and it was such a pleasure to read it again. I do agree with the critics who say that the beginning and set-up takes far too long, and perhaps that’s why many publishers couldn’t get past that to see the excitement of the story. But publishing has changed in twenty years.

It reminded me of Anton Chekov’s advice to writers – If in the first act you have hung a pistol on the wall, then in the following one it should be fired. Otherwise don’t put it there.

Everything in Harry Potter is intentional – Ron teaching Harry how to play wizard chess is more than a simple scene of friendship – it sets up the climax where Ron has to play the chess game of his life in order to move Harry though to the final scene with Voldemort. The mirror of Erised is there for Harry to realise how much he wants his family but is a pivotal moment where Harry can realise his deepest desire to find the philosopher’s stone to prevent Voldemort from finding it and using it for his own evil purposes.

The small details are wonderful – Dumbledore choosing an earwax-flavoured Bertie Bott’s every-flavour bean, the floating candles in the great hall, the list of books Harry is expected to study and Diagon Alley …

There has been a bit of wand waving and Latin cursing going on. As you do. Our dinner conversations have centred around Harry Potter trivial pursuit-style questions.

On Saturday night, the five of us will be curled up on the couch, eating chocolate caramel popcorn from here and watching the first-year students catch sight of Hogwarts from their boats. Hope your Saturday night is just as fun!