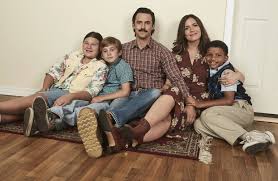 I don’t watch a lot of television. I don’t like reality tv shows, I only watch footy when my team, Essendon, is playing and I’m not watching a Netflix series at the moment, although I have enjoyed House of Cards (American version) in the past.

I know there are lots of great shows out there. Every now and again I watch half an episode of something with my husband and we do have regular family movie nights so I watch a lot of kid-friendly movies. I usually need to do something creative while I watch tv, like quilting.

But I have watched every single episode of This is us, an American series filmed in a few different cities, because I find the characters and their stories compelling.

There are five main characters from a family, shown with a present timeline and a few timelines in the past. Rebecca and Jack Pearson married and Rebecca became pregnant with triplets. She gave birth to all three babies in 1980, but while Kevin and Kate survived, Kyle didn’t. Rebecca and Jack were devastated – they had everything ready for three babies. On the night the triplets were born, a drug-addicted poet watched his girlfriend die giving birth and dropped his hours-old son at a fire station. The baby was brought to the same hospital where Rebecca and her babies were patients. Jack and Rebecca, a white couple with their two white babies, decided to adopt this unwanted black baby whom they called Randall.

Good novels focus on character arcs – what each character is like at the beginning of the book with their flaws and ‘glimpse of greatness’ and how the character changes through the course of the novel by reacting and responding to the different events that unfold. This is us shows that unfolding of character with hints of those traits at an early age and then showing us how those traits develop over time into adulthood.

There are many different themes. Randall has to make sense of his world, a black boy adopted by a white family. It’s not only about how he looks but how he feels and how he’s perceived. Kate has been overweight since childhood and still struggles with it as an adult. Kate also struggles to follow her beautiful and talented mother as a singer. Kevin was a star footballer in school, then an injury forced him to stop and he took up acting. His success on tv as ‘The Manny’ hasn’t done anything to make him feel secure. And then there are relationships and children and careers.

Maybe your family is not like the Pearsons at all. But we all have that moment of truth, when we are connected with either our family or friends or colleagues and feel, ‘this is us’ – this is how we roll, this is how we play or create or lead or work or love.

Maybe you didn’t expect to find a television show review on this bookish blog of mine, but I’m passionate about stories. While the show is definitely heart-warming, the stories are told with intelligence and perception which means there’s no sentimental rubbish at all. The characters are have both flaws and glimpses of greatnesses – which makes them pretty relatable. This is all of us, really.