I’ve recently read three adult books about three different female protagonists by women writers in three different countries which have all amazed me with their insightful writing, beautiful language but mainly the strong voices of the characters. All books had themes of connection, loneliness and healing. 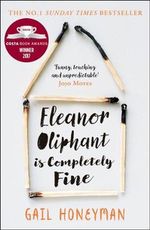 This debut novel is written in first person from the perspective of Eleanor Oliphant. And as you can infer from the justification word ‘completely’ in the title, she’s not so fine after all. She’s a twenty-nine year-old woman living alone in Glasgow, working as a finance clerk. Her weekdays and weekends run with monotonous certainty until she comes into contact with three men – a singer she falls in love with who doesn’t know of her existence, Sammy, an older man who has an accident in the street and Raymond, the new IT guy at work. In Eleanor’s words:

A philosophical question: if a tree falls in a forest and no one is around to hear it, does it make a sound? And if a woman who’s wholly alone occasionally talks to a pot plant, is she certifiable? I’m confident that it is perfectly normal to talk to oneself occasionally. It’s not as though I’m expecting a reply. I’m fully aware that Polly is a houseplant.

In an interview, Honeyman said that she ‘tried to ensure that Eleanor was never self-pitying, so that there was space for the reader to draw their own conclusions and, hopefully, to empathise with her.’ I think she succeeded! 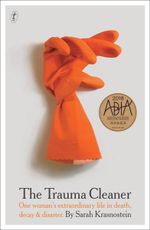 A non-fiction title, this book has a larger than life character with Sandra Pankhurst. She was born Peter, a baby boy adopted by a couple who had a daughter but no sons and couldn’t have any more children. They did go on to have two sons, and Peter suffered from his violent father. Peter left home, married and had two sons of his own. But in his thirties, he slowly transitions into Sandra. Sandra had many jobs, including drag queen, sex worker and business owner. It is her job as a trauma cleaner, someone who cleans up accidents, sorts out hoarding issues and deals with death scenes, that is perhaps her most interesting job. Krasnostein has written a moving and empathetic account of Sandra’s life. It took her about four years of following Sandra to her clients to uncover most of the details of Sandra’s life – there are many gaps as Sandra admits the drugs she took may have affected her memory. There is a graphic account of a rape scene which may be difficult to read. This extract comes from a visit to Marilyn, a hoarder –

‘You’ve got bugs on your bed,’ Sandra says matter-of-factly.

‘They don’t seem to do any harm,’ Marilyn answers, and turns to the pile of mail that Sandra has prepared for her to sort through. ‘I’ve got mail here I haven’t bothered to open.’

Having cleared more space on the bed, Sandra now finds another silk kaftan creased against the bedspread. She tries to smooth the deep wrinkles out with her palm, reunited it with its belt, arranges it on a hanger and swoops it back into the closet. 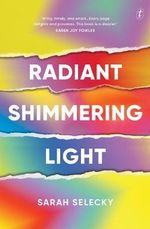 A gentle satire, this novel set in Canada and the US lightly mocks the social media world where every turmeric latte is photographed in the best light and newsletters are sent out to reflect the glossy surface, rather than the banal or the debris of real life. Lillian Quick, forty-years-old, is a struggling artist who paints pet aura portraits. She connects with her long-lost cousin, Eleven, who is a gifted speaker and entrepreneur in women’s empowerment circles. All of a sudden, Lilian’s life changes – she’s earning money, she’s part of a team, she’s being supported to be her best self in her own empowerment journey. But is it real and will it last?

Selecky balances the gentle fun of the perfect-yourself, open-yourself-to-possibilities, you-are-beautiful-as-you-are culture with razor-sharp insightfulness and empathy. I found myself laughing and hoping and caring all in the same sentence. The newsletters, texts and social media posts scattered throughout the book both advance Lilian’s story and act as a wise social commentary.

I close my eyes and imagine warm light radiating out of me. I picture the woman this ticket belongs to. It helps to be specific: she is wearing a black coat, a wool scarf, and velvet gloves. I send out my light and connect to the morphogenetic field using my heart energy. I picture her walking to meet me halfway. She is thrilled. This is a wish come true for her.

In an interview with PRISM International, Selecky says: ‘We live online now. We stare into the face of a screen more than we look into other human faces. We do everything through our phone – everything. I wanted to create the visceral experience of what it means to live online. The constant connection/disconnection, and what that feels like in the human body. That’s what this story is about—connection.’

Selecky runs an online writing school – she acknowledges the irony of encouraging writers to disconnect to discover their writing voice through an online writing school! I have completed one of her courses – she taught me about the importance of having a relationship with writing, rather than looking at it as a tool or a business or something separate from yourself.

I loved Eleanor’s fall from her routined life into a messy heap on the floor, then her slow rebuilding into a better version of herself, but always, always, her strong, quirky self, untarnished by the culture around her. I admired Sandra’s strength and her meticulous attention to detail and her ability to talk to anyone. I loved Lilian’s innocent observations and her struggle to balance the digital world with the real world.  Three strong, memorable characters from three fascinating books – happy reading!